The National Lottery Anniversary Run in the Olympic Park 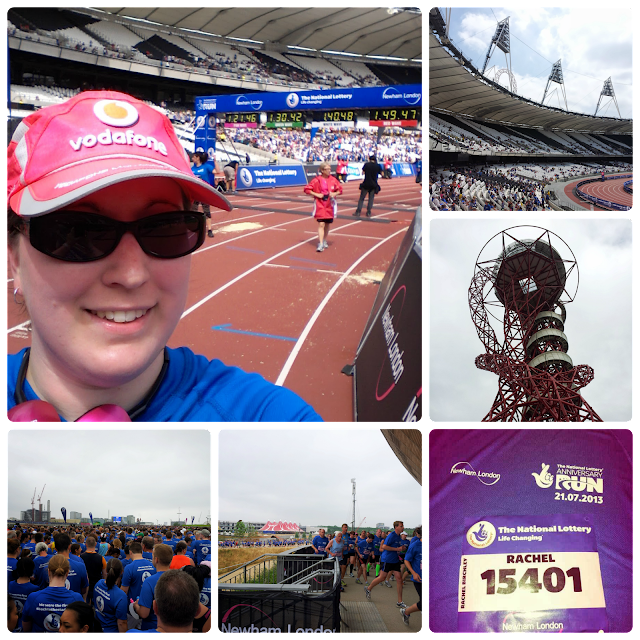 Sunday 21st July came round all too quickly!  I signed up to do a 5 mile run a couple of months ago with my work colleagues and somehow never got round to doing any training!

The National Lottery Anniversary Run was staged to celebrate the London 2012 Olympic legacy and the money that National Lottery ticket sales has donated towards training British athletes.  The run took place in the Queen Elizabeth Olympic Park and finished off in the stadium!

I got the train up to Stratford with my colleagues.  The closer we got to London the busier the train got; the vast majority of passengers were travelling up for the National Lottery Anniversary Run.  I’m not psychic by the way, we were all wearing the blue run t-shirts provided by the organisers!  The atmosphere getting to the stadium was buzzing and I was really excited to see the stadium and the rest of the park since I wasn’t able to get any tickets for the Olympics.

I couldn’t believe how busy it was; my bib number was 15401!  There were people everywhere.  I was starting in the pink wave, which was last.  I can understand why they wanted to put the slower runners at the back but it also meant I had less time to finish the race!  Also, the wave was so huge that there was a real mixture of abilities and quite a few frustrated people I think who were trying to push through the crowds.  Now I want to let you know early that I am NOT a runner.  The only time I run anywhere is if I’m going to miss the train or something!  I haven’t run properly since school, which is beginning to become a distant memory.  I had planned on doing some training and using the couch to 5k podcast that I’d downloaded.  Unfortunately, the closest I got to actually using said podcast is putting it on my iPod.  I am pretty impressed that I managed to run about half a mile.  This is probably the furthest I’ve ever run!  Once I realised I couldn’t run any further, I walked.  But this was no casual stroll in the park!  I power walked/racewalked the whole way, except for when I stopped to go for a wee, and to take photos.

The track wound its way through the Olympic park and took us past the velodrome, the Copper Box, the Orbit and finally into the stadium, which was the best bit by far!  The track went down into a service road under the stadium.  This is when I took my headphones off and I’m glad I did.  Over the PA system they were playing crowd noise with bits of Olympic athletics commentary and the music from Chariots of Fire!  I was so tempted to do the slow motion run but decided I’d look like a bit of an idiot really.  Then there was light at the end of the tunnel and I ran out onto the track!  The last 300m of the run was on the athletics track inside the stadium in front of thousands of cheering spectators.  It was amazing.  I started to jog but then realised I couldn’t keep it up so I continued my brisk walk until I got to the 100m mark  when I decided to make a run for it.  The girl band Little Mix was singing live on the stage, the crowd were cheering me on and I just about managed to hold back tears.  When I got to about 50m from the finish line I gave it my all and ran as fast as I could, all the time worried I was going to face plant the track in front of all those people and the photographers.  Luckily, no such thing happened and I ran across the line.  I completed the 5 miles in 1:17:52.

Apart from the fact that it was hot and tiring, I actually quite enjoyed myself.  I had my music turned up and I just went for it!  I wish I was able to run though.  I am currently losing weight and hopefully that and my podcast, which I really am going to start to do once I’ve bought new trainers, will enable me to run the 5k fun run that I’m doing in September.  It was a fantastic day and one I’ll remember for a long time.  Plus, I got a medal!  My first medal ever 🙂

1
5 Free Things to Do in London, England
How to Treat Yourself at the Weekend - Lunch at Blooms Restaurant in Folkestone