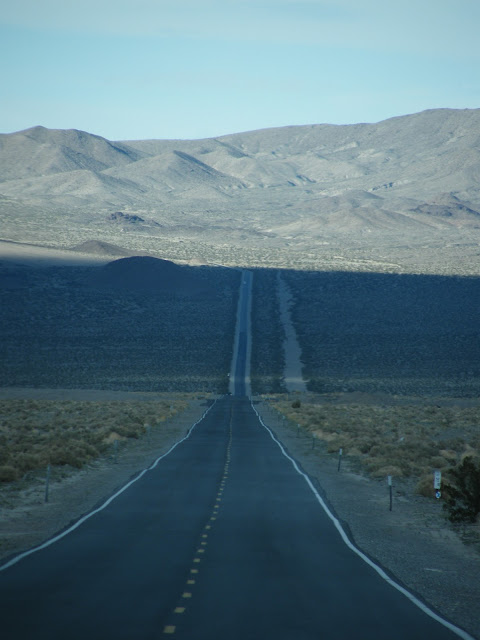 In January 2008, I travelled with Trek America on the Western Sun tour. One of our stops was Death Valley National Park. Most of the journey was through desert. It could have been the setting of a Western movie. We stopped for many impromptu photo stops along the way and our last stop was Badwater Basin, a salt lake 282ft below sea level. It was a stunning expanse of not a lot. There was shallow water with salt crystals but mostly the basin was dry. This was also my first experience of the dreaded drop toilet. The less said about this the better but I will say that you need to be desperate to use this particular one. You could smell it before you opened the door. I have since used other drop toilets and none have been this bad. 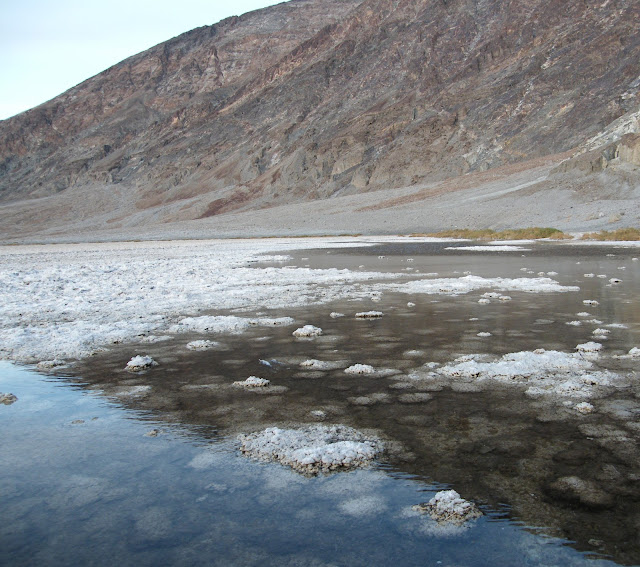 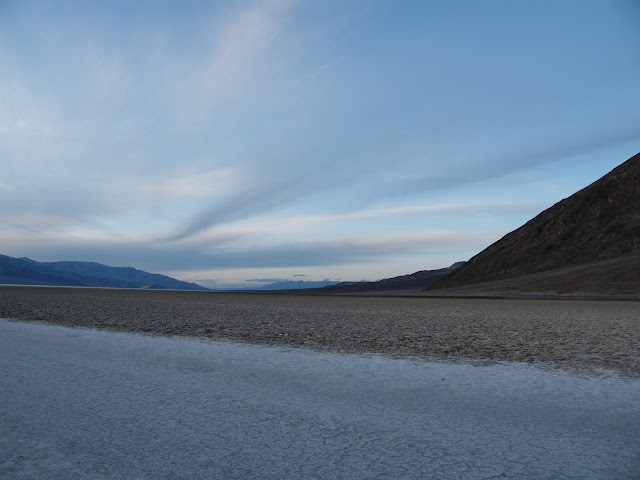 Badwater Basin – a whole lot of nothing 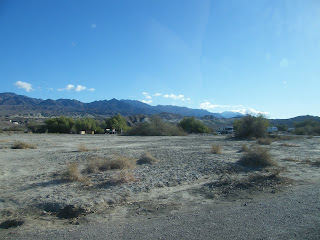 The view from my tent at Furnace Creek Campground

Furnace Creek Campground was really basic and didn’t even have showers. Our wonderful tour leader and driver, Paul Nicolas, thought he’d help us out by driving the van off the road and leaving the headlights on while we put the tents up. Unfortunately the plan backfired as the van got stuck in soft sand. So after erecting the tents we had to push the van out of the sand! About 6 of us pushed the front while Paul reversed out. It definitely added some excitement to our day. Paul named us The Tigers and gave us all high fives! It was really funny and the other campers were laughing at us and taking pictures!

After dinner and s’mores around the camp fire my tent-mate Sabina and I ventured in to the darkness to find the toilets. Getting there was easy enough because we could just head for the light. Coming back there were no landmarks and all we could see was the 6ft in front of us that the torch light offered. We eventually found our tent, not before almost climbing in to someone else’s! I didn’t sleep well that night as not only was it freezing but there were lots of funny noises coming out of the dark including howling coyotes! They were probably not as close to the tent as they sounded but I was terrified all the same.

I woke up to a surreal picture. We hadn’t properly seen the campground on arrival due to the lack of light but opening the tent to the desert really hit home that we were in the middle of nowhere! After a quick visit to the National Park Museum the day was spent hiking Golden Canyon. It started of relaxed and quite gentle but soon became awful! I don’t mind walking but am not keen on hills. There were too many ups and downs for me and in parts the trail was next to a steep drop! I wasn’t impressed. When we finally made it to our destination of Zabriskie Point the view was spectacular. At the time I didn’t think it was worth the trek but looking back I can remember the view more than the hike. 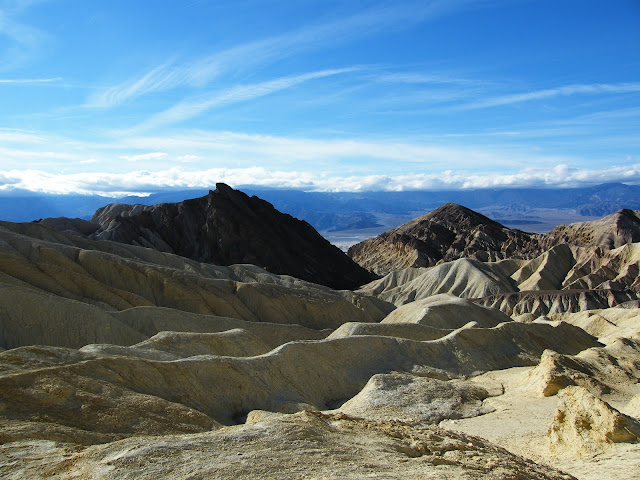 The view from Zabriskie Point

Just before sunset we went to the sand dunes with the intention of sand boarding with a sled greased up with cooking oil. This was Paul’s idea so he went first to demonstrate and face-planted himself into the sand! He looked like an ostrich! One of my trek mates, Jong, managed to take a photo while Paul was mid-air and his head was going toward the sand his feet curling up over his head. We were all wetting ourselves – especially as I’d shouted please don’t break your neck just before he did it! I made the decision that I would “supervise” while my friends had a go. Luckily no one else did anything as spectacular as Paul! We saw the amazing sunset at the sand dunes. The red colour of the rocks was really emphasised. It was how I’d imagine Mars to be like. 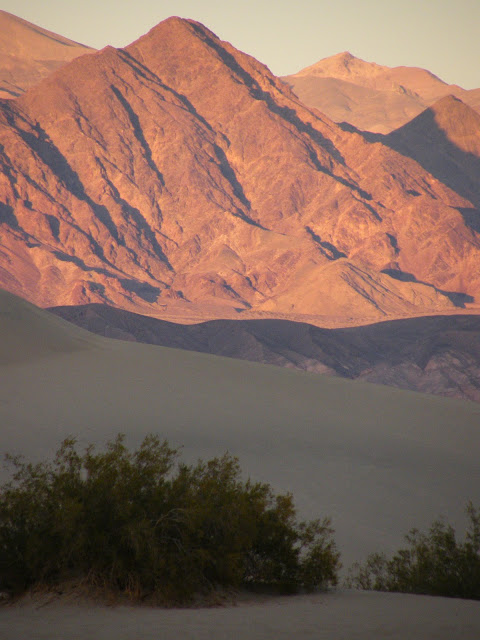 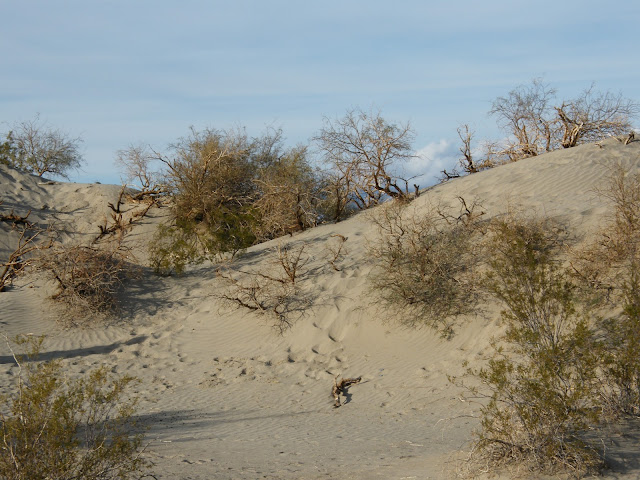 When we got back to camp Paul gave us a ride to the ranch down the road where we paid $5 to use the showers by the pool. Before walking back to our campground Sabina and I stopped by the General Store and bought ourselves some vodka and orange juice, which we started drinking with dinner. By the time we’d finished dinner we were quite drunk and some Texan boys came over to join us. The rest of our group went to bed, early as usual. The boys’ Geology university field trip group was also really boring and their teacher had given them a curfew. They told us their names but they were so ridiculous we we’re sure they’d made them up! Once we got internet access in Las Vegas the following day we Facebook stalked them and they it turned out they were real names after all! The four of us stayed up chatting and drinking around the fire until it got really cold, we’d polished off the bottle of vodka and Sabina had thrown up! The boys decided they should be gentlemanly and help us to our tent. They walked us over, opened the zip, pushed us in and then zipped us back up again. I woke up in the morning having somehow managed to remove my coat and shoes and get in the sleeping bag. Unfortunately, I hadn’t got as far as doing it up so I was freezing and I felt rubbish. We then had to break camp and get ready for our drive to Vegas. This was less than fun.

Death Valley is a fascinating place to visit. For more information from the National Park service visit their website http://www.nps.gov/deva/index.htm. It’s a land of extremes: from below sea level basins to snow-topped peaks. Temperatures can reach 50 degrees C in summer. Most campgrounds are only open October to April as this is the best time to visit. Death Valley is about a half day drive from Las Vegas. It is a frequent stop on many Western USA Trek America tours. Take a look at www.trekamerica.co.uk for more information.