Exploring Dover Castle – A Great Day Out in Kent, UK 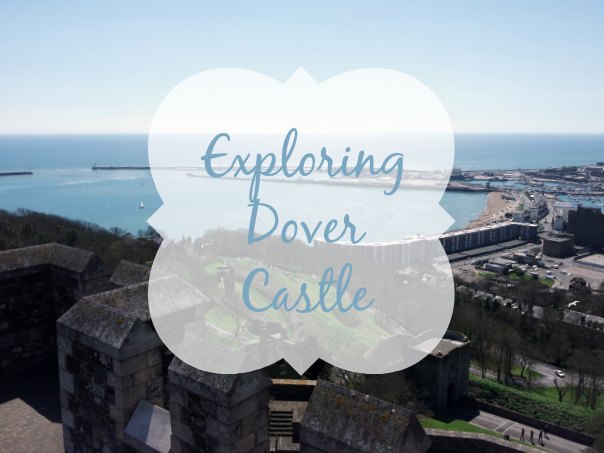 Dover: The Gateway to Europe

For many people Dover is just the jumping off point from England over to the continent. Not many people stop and stay. To be honest the town centre doesn’t have much going for itself but there’s a long promenade along the beach, which has been recently renovated, and the historic Dover Castle, which is the topic of this blog.

Dover Castle sits atop the famous White Cliffs of Dover and commands an enviable position overlooking the town of Dover, the English Channel and France beyond. There has been a castle of sorts on the site since the Iron Age, when it was a modest hill fort. The construction of the castle itself was started in the 1160’s, on the instruction of King Henry II. Since then the castle has hosted many royal visitors including King Henry VIII and later his daughter Queen Elizabeth I. The castle was garrisoned up until 1958 and over the years the great fortress has been a hub for British national security.

My husband, Marc, and I visited Dover Castle the day after our wedding.  Our wedding reception was held at the Dover Marina Hotel & Spa, right on the waterfront.  It’s such a beautiful location.  I’ve lived in Folkestone, just 8 miles from Dover for just over 12 years and I’d never been to Dover Castle so we took the opportunity to visit with family.

Dover Castle is managed by English Heritage and the admission costs are pretty steep at £17 for adults, however we did spend about 5.5 hours exploring and there is plenty to see.  Admittedly, we didn’t pay as my family very kindly offered to cover the costs for Marc and I.  Included in the admission ticket is entrance into the castle and guided tours around the Secret Wartime Tunnels. 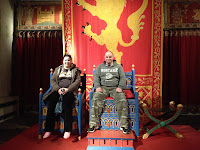 Marc and I sat on the thrones.
It turns out we weren’t supposed to sit on the display
but we didn’t read this notice in the map until it was too late!

A few years ago the Great Tower was transformed with bright primary colours and filled with artifacts to recreate medieval life in the castle.  Who knew that the king would have sat on a bright blue throne?!  There is a brilliant article explaining about the project in the July 2009 issue of Heritage Today if you’re interested to learn more.  The project was also featured on a Time Team special, which is a Channel 4 archaeology programme.  As well as the displays there were actors dressed in Medieval costumes getting the visitors involved in court life.  It looked like good fun and the children seemed to be enjoying it. 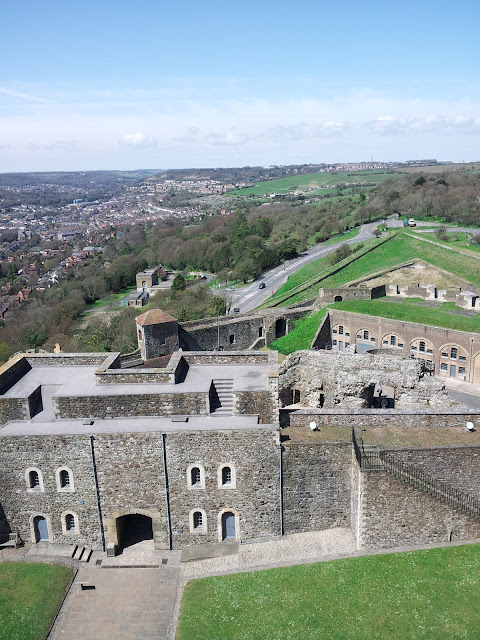 Looking back down into the castle grounds and across Dover

The climb to the top of the Great Tower was knackering but worth it for the fantastic views! We could see the whole of Dover and an expanse of the English Channel.  I can understand why Dover Castle was such an important garrison for 9 centuries.
Looking back down into the castle grounds and across Dover 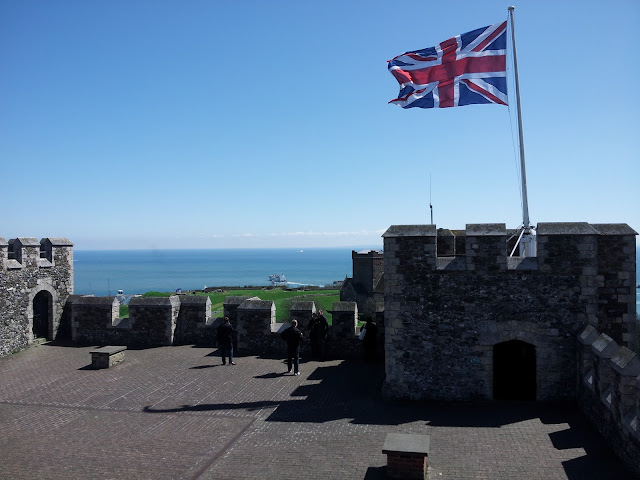 The roof of the Great Tower

It’s true when they say that history is wasted on the young.  At school, I was never interested by my history lessons and spending the day at stately homes was boring.  As an adult, I am now fascinated by history.  Standing in a castle built nearly a thousand years ago is a humbling experience.  I loved spending the day at the castle.  The wartime tunnels are another matter.  I don’t like the dark, I don’t like confined spaces, I don’t like mannequins and I don’t like things that make me jump.  A guided tour down dingy, poorly lit tunnels a long way under the surface is not my cup of tea.  These secret wartime tunnels have been used since Napoleonic times but most recently they played an important part in the evacuation of Dunkirk during the Second World War.  British and Allied troops were stranded on the beaches of Northern France and Operation Dynamo, which saw 338,000 men rescued, was commanded from the Naval HQ within the tunnels.  The tour is very cleverly done, with visitors moving from room to room listening to audio and watching videos projected onto the walls.  No photographs were allowed to be taken inside the tunnels due to copyright.  Luckily there were no mannequins to scare me and Marc stayed by my side the whole time.  I was very pleased to reach open air at the lookout point in the cliffs. 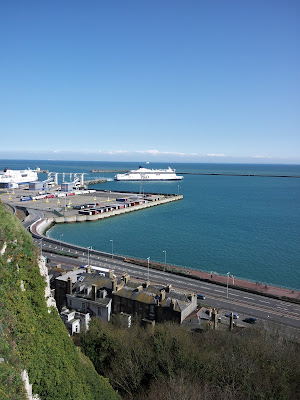 Lookout point over the Eastern Docks

Overall, we both had an enjoyable day out at Dover Castle.  I would highly recommend visiting if you’re in the area.  Dover is only 1 hour 10 minutes from London St Pancras International on the high speed train so it makes an ideal day trip from the capital.  Britain has such a rich heritage and places like this exist to celebrate our history and remind younger generations where we all came from.

The castle is easily accessible by car.  Dover is reached by either the A2 or M20/A20 and upon reaching the town, Dover Castle is clearly signposted with brown attraction signs.  Parking is abundant up at the castle and it’s free, as you would expect when paying £17 each to get in!

By public transport it’s not so easy but by no means impossible.  Dover Priory railway station is 1.5 miles from the castle.  From the station walk to the town centre and Pencester Road, where all the main bus stops are.  From here, jump on the number 15 bus towards Deal.  The bus stop is near the coach park for the castle.

As mentioned above it costs £17 for an adult entry ticket.  However, English Heritage do offer an Overseas Visitor Pass, which costs from £24 per adult and it’s valid for 9 consecutive days, allowing unlimited entry into hundreds of English Heritage properties.  Just visiting 2 attractions could save you money.  It’s really worth considering if you’re coming on holiday to the UK.