It’s time for another Friday Photo.  I swear the weeks are getting shorter and shorter.  My life seems to be disappearing before my eyes! 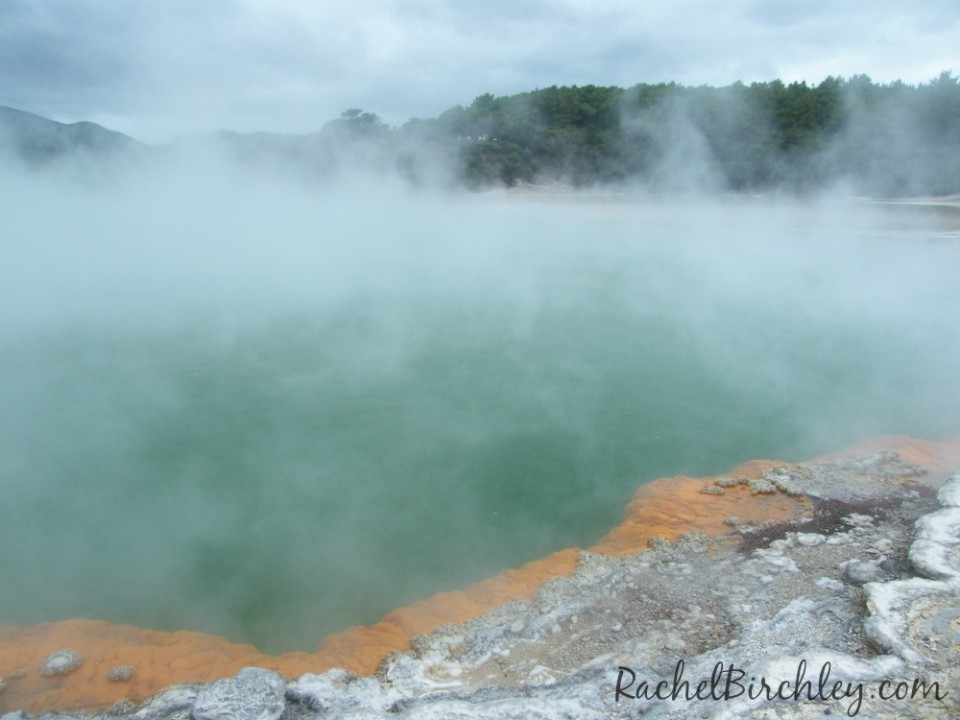 This is the Champagne Pool at Wai-O-Tapu Geothermal Wonderland near Rotorua in New Zealand.

The name is derived from the abundance of CO2 gas, just like a glass of bubbly.  The water is pretty damn hot, you can see the steam rising.  The pool is filled from a geothermal hot spring.  It may look lovely, but the smell was not as nice!  The geothermal activity emits a lot of sulphur so the whole area smells like less than fresh eggs.  Even in the town of Rotorua itself it’s pretty stinky; it took some getting used to.

Have a good weekend!  What have you got planned?

In the second of my Friday Photo series, I wanted to share one of my favourite photographs.  I realised while in New Zealand that I was starting to turn into my father and enjoy taking photos of flowers.  This gorgeous light purple water lily was floating of the surface of a pond inside the hot house of Wellington’s Botanic Gardens, where I took A LOT of pictures. 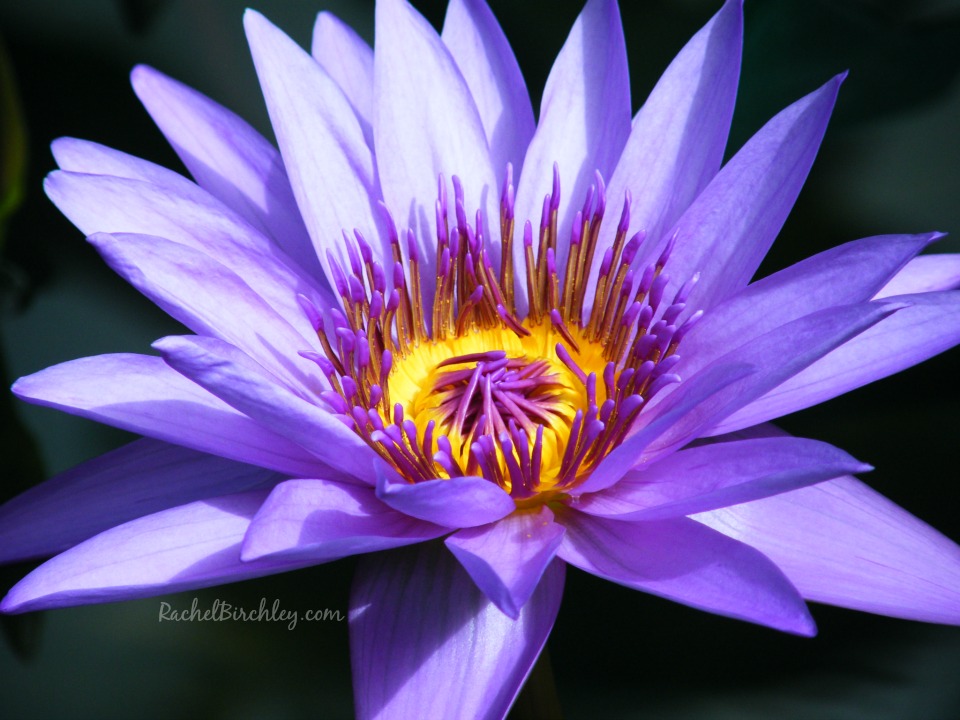 I love the striking colours.  One day, I’ll get this made up onto a canvas.  I can’t believe I took this photo six years ago.  In some ways it seems like just a year or so ago and in others it feels like a lifetime ago.  So much has happened since I came home from travelling.

Have a great weekend!

I enjoyed spending a few hours wandering around the shady paths taking in the colourful displays and listening to the wetas.  There is a great map of the Botanic Gardens available to download from the official website.

I would like to share with you some of my photographs of flowers that I took in the Botanic Gardens.  This is when I realised I was getting old (and turning in to my Dad!) as I enjoyed photographing the floral offerings. 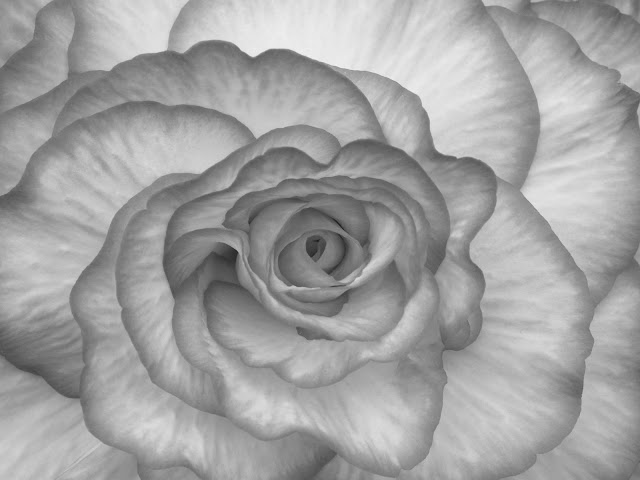 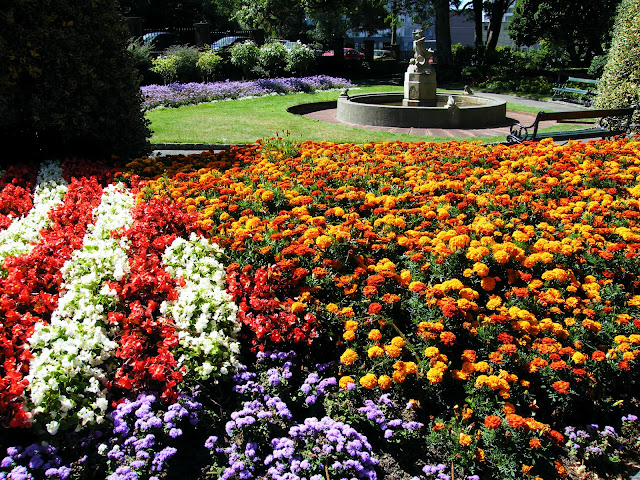 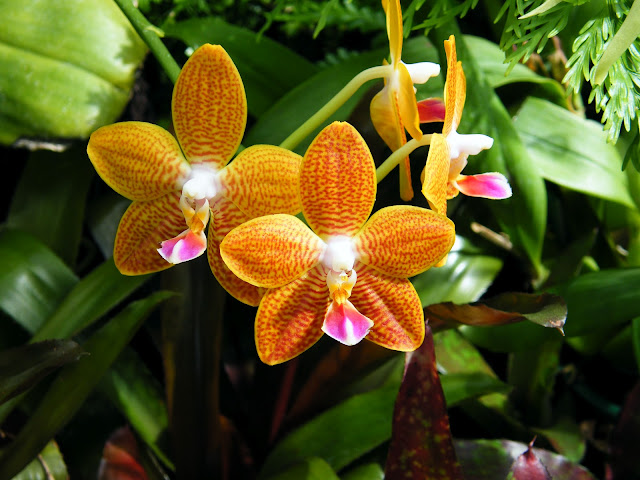 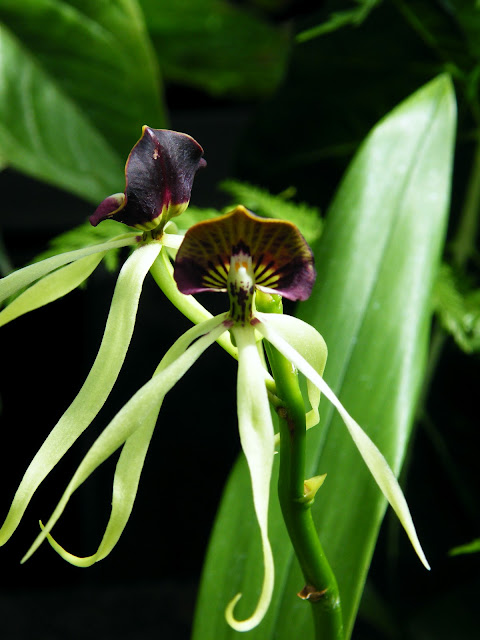 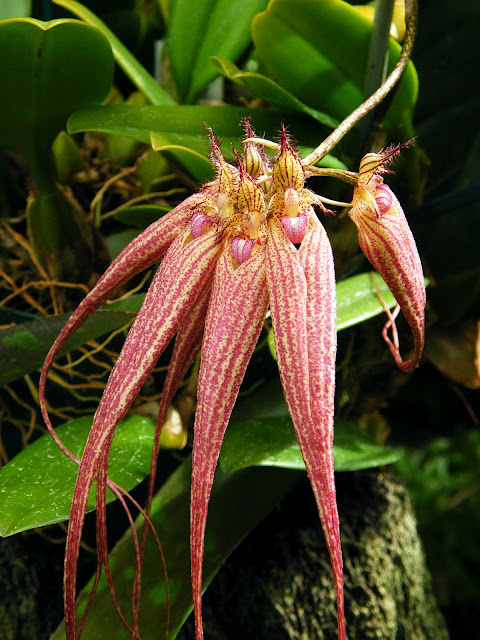 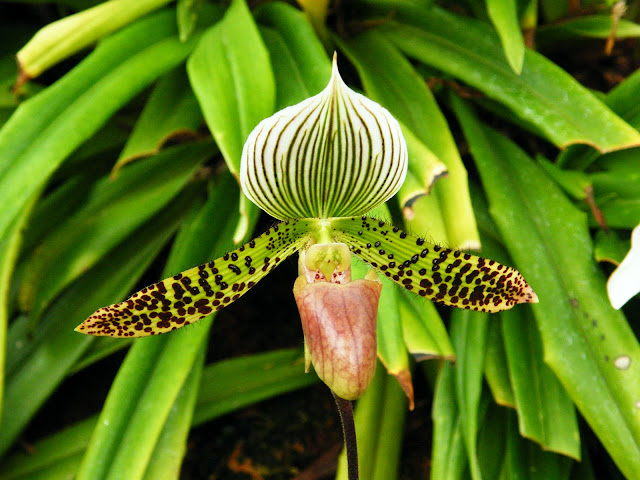 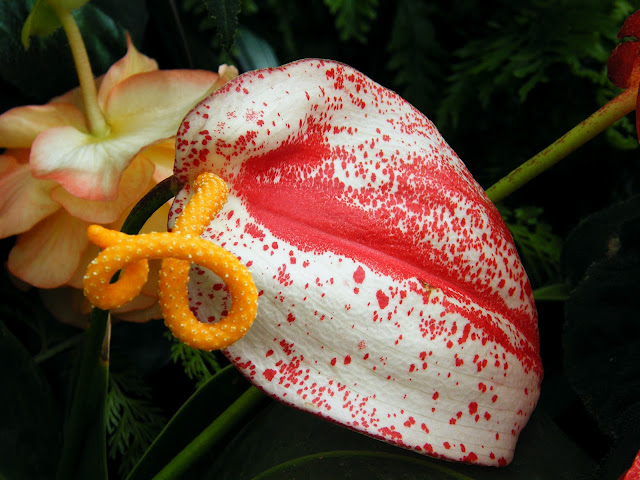 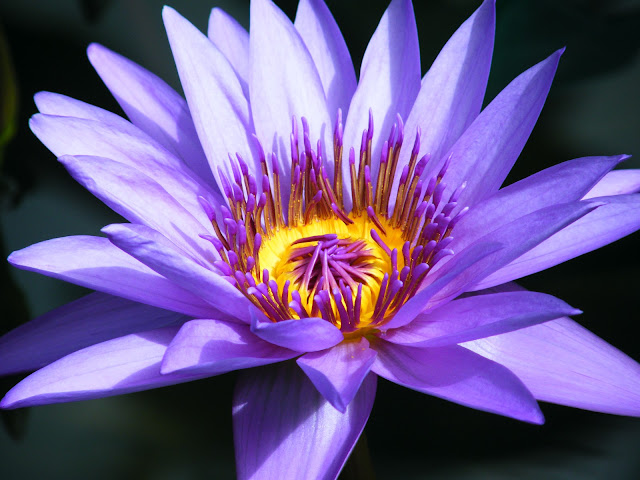 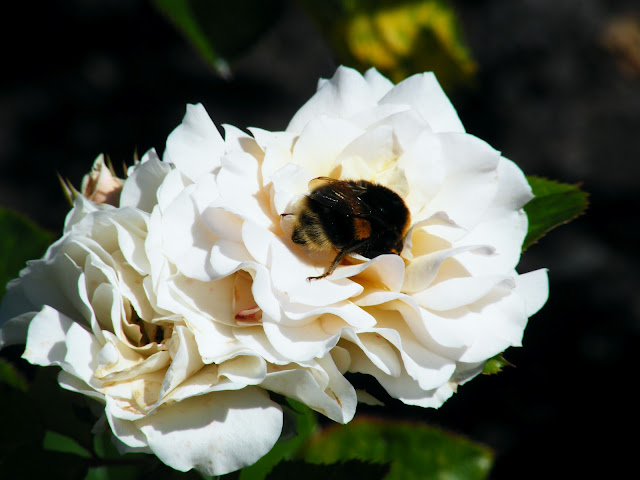 My Journey from Wellington to Christchurch, New Zealand

Wellington and Christchurch are separated by about 200 miles and the Cook Strait.  There are various ways to make the journey.  By far the quickest option is to fly.  Air New Zealand fly between the two cities in 45 minutes for about £100 or Jet Star’s service takes about 55 minutes for about half the cost.  This could be the option if you’re pushed for time but in my opinion you miss out on a treat. 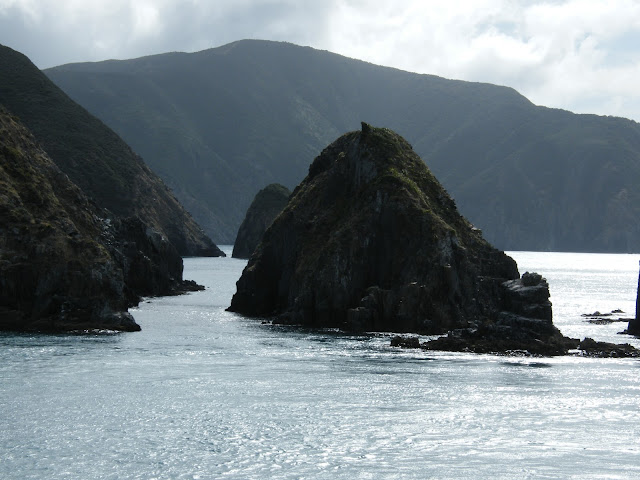 I opted for the Interislander ferry and the Tranzcoastal (now renamed as the Coastal Pacific) train.  I was able to book a throughfare so I checked in my bag as a foot passenger in Wellington, not to see it again until our arrival in Christchurch.  The ferry offers a sedate 3 hour cruise through stunning scenery.  The part of the journey crossing the Strait is less interesting as all you can see is water but this gives you an opportunity to have a walk round the ship, grab a bite to eat or lounge in one of the many comfy seats.  There is even an on-board cinema.
Once you spy land it’s time to grab your spot on the observation deck.  This is the best part of the journey.  Enjoy basking in the sun as you cruise through the Marlborough Sound, Tory Channel and Queen Charlotte Sound before docking in picturesque Picton.  Just don’t forget your sunscreen as I ended my journey with a burnt face!  Not a good look. 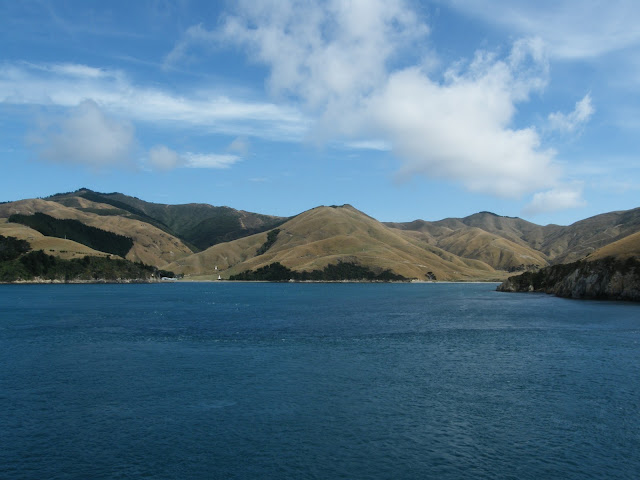 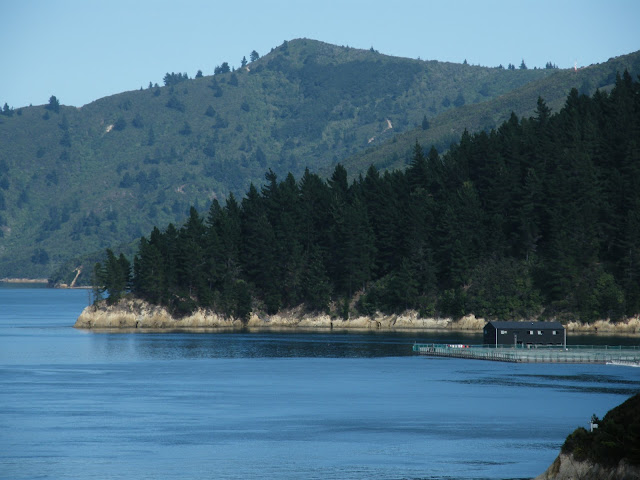 I was expecting the hour long stop-over to enjoy the small harbour town of Picton however due to a mechanical breakdown I had about 3 hours.  Annoyingly because we were always waiting for news and didn’t know what time the train would finally turn up I had to spend a couple of hours hanging around the tiny railway station and the immediate area.  There’s only 1 train per day in each direction so I couldn’t afford to miss it, especially since my luggage would be on the train even if I wasn’t!
Finally the train arrived and everyone took their seats.  Since my trip KiwiRail have overhauled their coaches with the new panoramic windows allowing better photography.  My favourite part of the train was the open-air viewing coach.  According to KiwiRail’s website these coaches have also been replaced so I can’t comment on what they are like now but for my trip the open-air coach was a bit like a cattle pen but I loved it.  With the wind in my air I felt like I was actually travelling through New Zealand not cooped up in air-conditioned comfort. 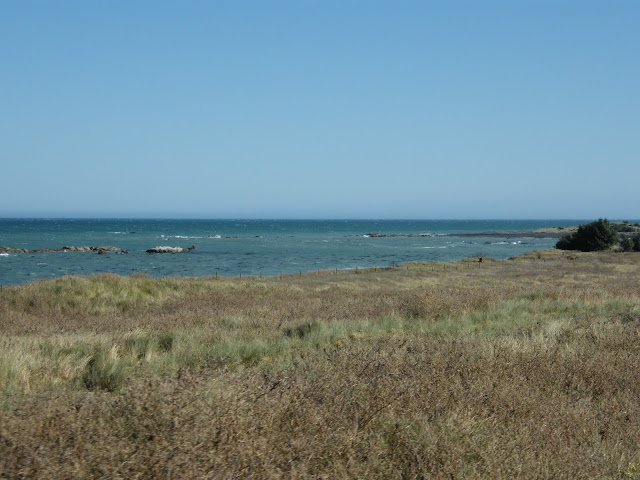 We whizzed past fields with some of those famous sheep, hills, rivers and the Pacific Ocean itself.  The commentary told us to look out for seals on the rocks near Kaikoura but however much I squinted and scoured the beach I couldn’t spot one of these allusive creatures. 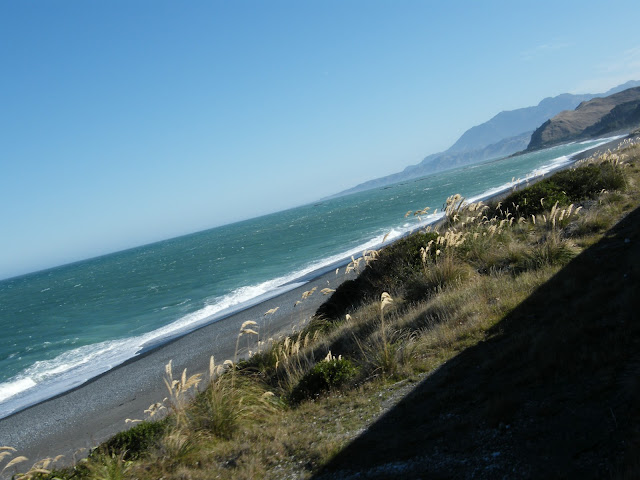 Had the train departed Picton on time it was due to arrive in to Christchurch just after 6pm.  Our earlier delay meant that it was dark before we got in to our destination.  I had intended on getting a bus in to town but it was after 9pm, dark and I really hadn’t got my bearing.  I ended up getting in a shuttle bus, conveniently there were these minibuses waiting outside the station to take passengers in to town for a nominal per person charge.  Since I hadn’t planned on paying for dinner on the train I didn’t have enough cash.  Luckily the driver agreed to stop at an ATM in town.  He wasn’t very impressed when I then wanted change from a $50 note.  But what was I supposed to do?

It was late when I eventually arrived at my hostel, Base Backpackers, right in Cathedral Square.  This central backpackers was a great place to stay, unfortunately it has been closed since the terrible earthquakes that the city has fought to recover from.  It is hoped that the hostel will open again soon.

Christchurch is a fantastic city and it’s important that tourists continue to make the journey.  To help visitors access up to date information following the earthquakes Lonely Planet have released the Christchurch chapter of their upcoming guidebook update as a free download.  Visit the fab Canterbury and Christchurch Tourism website for up-to-date information.  When you go to New Zealand please include Christchurch in your itinerary and consider my journey as you really feel immersed in the scenery. 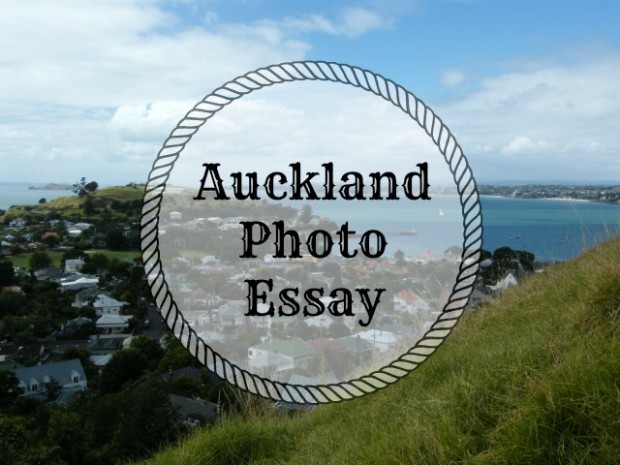 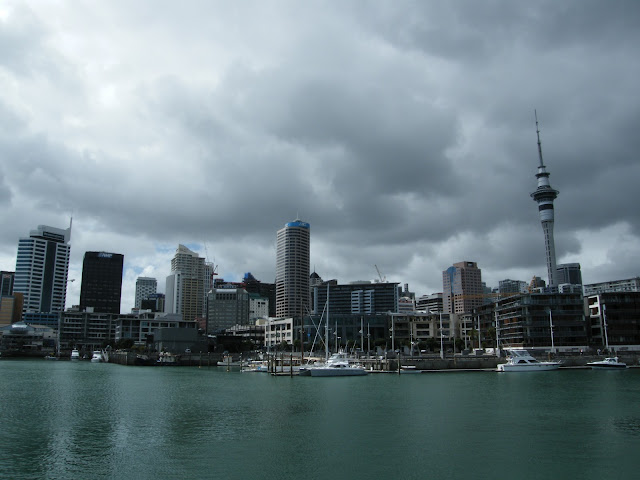 Auckland’s enviable position on the water makes it a haven for sailors, watersports enthusiasts and anyone like me who loves to be near or on the water.  Even with threatening clouds above, the city skyline looks best from the harbour. 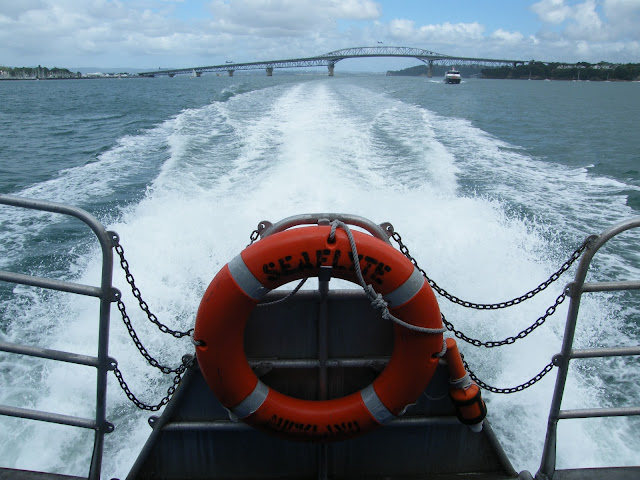 A harbour cruise is the perfect way to see the city from the water and to explore the harbour area with zero effort.  I purchased a ticket for the 1 1/2 hour Fullers cruise, which also offered me a return trip to the Victorian suburb of Devonport included in the price.  Currently an adult ticket is available for NZ$38 or approximately £19/US$30.  The return trip to Devonport normally costs NZ$11 so this makes the harbour cruise better value for money.
Top tip! Even in Summer take a jacket on the boat as it gets chilly in the breeze. 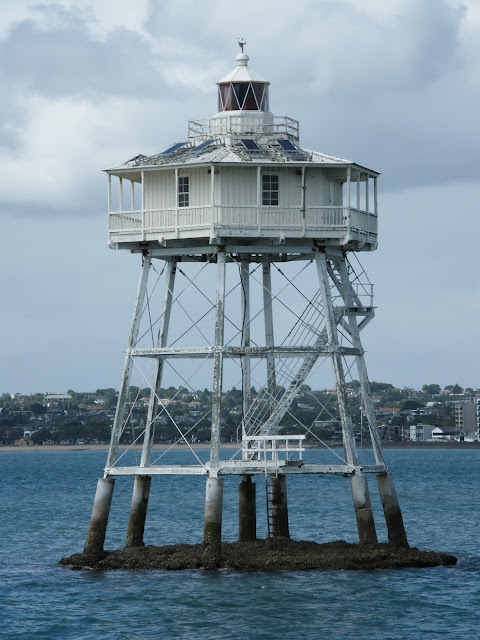 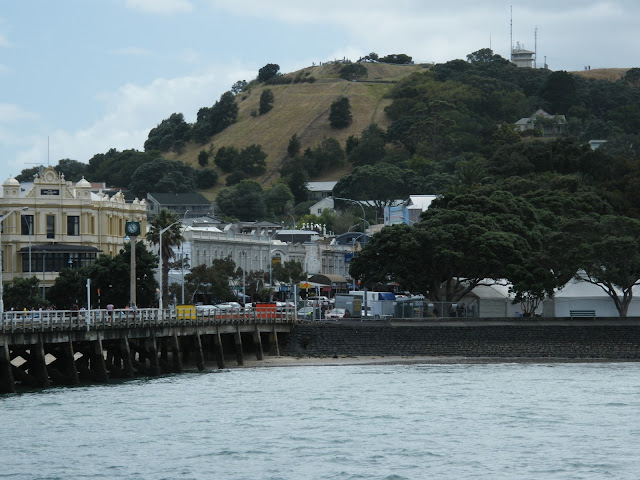 The historic Victorian suburb of Devonport. Home to World Heritage buildings, the Royal New Zealand Navy’s national base and some great fish and chips, or “fush and chups” as the Kiwi’s insist in pronouncing it!  In the background of the above picture is Mount Victoria, a volcano cone whose peak offers far reaching views over the harbour and Auckland city beyond. 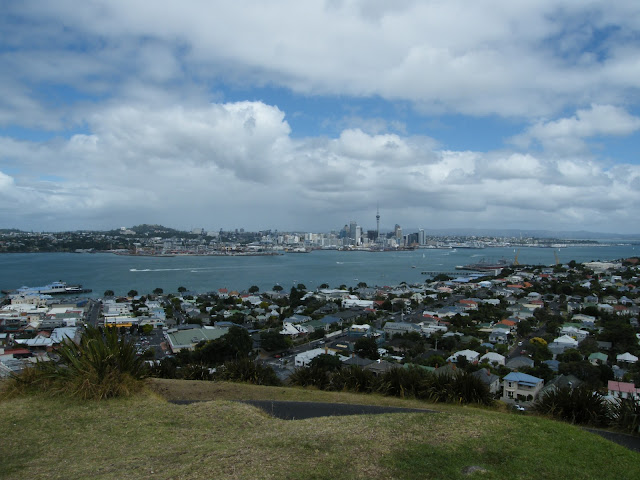 The view from the top of Mount Victoria.  Worth the 20 minute clamber, you can always stop for “photo opportunities” on your way up (read getting your breath back!).  The harbour water from up here looks a lustrous, shimmering turquoise. 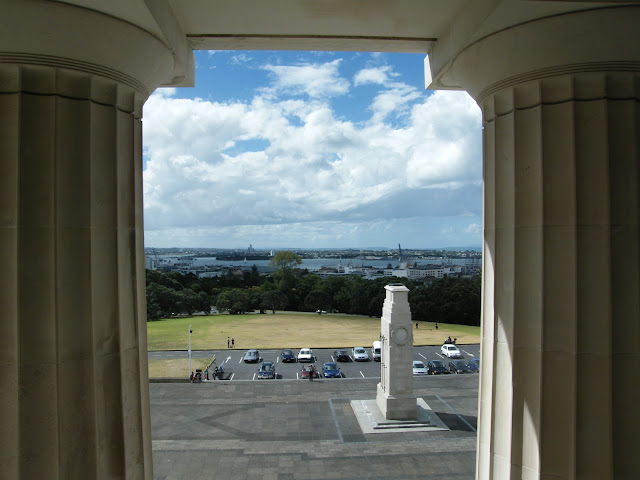 Check out these views from the commanding position of the Auckland Museum in The Domain.  Auckland Museum offers fantastic permanent and temporary exhibits, including a Maori Cultural Experience where the Haka is performed to send tingles down your spine.  Entrance to the museum is free, however a NZ$10 donation from adults is suggested.  The Cultural Experience costs NZ$25 for the performance only or NZ$35 to include the performance and a tour around the Maori gallery with the performers. 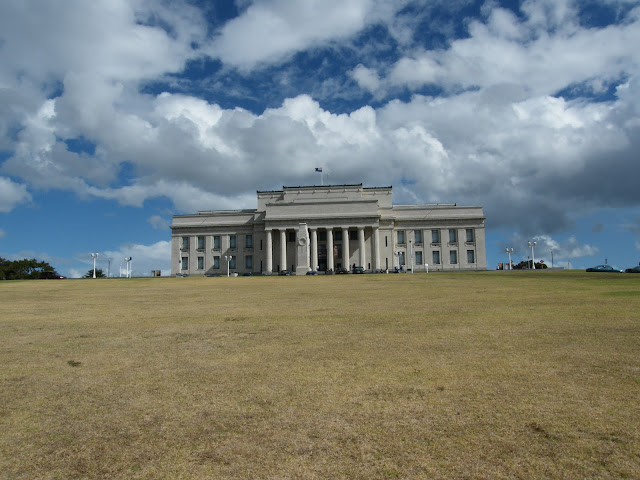 Auckland Museum perched up on the hill in the Auckland Domain.  The Auckland Domain is the cities oldest park and, at 75 hectares, the largest too.  The park was formed around the cone of an extinct volcano and the Museum sits at it’s highest point.

According to Lonely Planet, Auckland is one of the most liveable cities in the world.  As soon as I arrived I felt safe and welcome.  The city felt different to home but also strangely similar.  I loved every minute of my time there and urge anyone thinking about going to New Zealand to stop thinking about it and just do it!

You may also be interested to read my review of a wilderness tour that I took from Auckland or my post about the town of Rotorua, just a few hours south of Auckland.