Phew this week has flown past!  How can it be a week since the Canterbury Food and Drink Festival?  Shame on me for not getting this blog written sooner.

The last time I went to the Canterbury Food Festival it was called the Euro Fair and it was 2004!  So I thought it was time I went back.  As well as just wanting to have a mooch around, I was on the hunt for a birthday present for my Granma.  The Canterbury traffic seemed to be double as busy as normal and I was very pleased to have gotten the bus.  I hate driving when it’s chockablock. Walking into the Dane John Gardens, I could immediately smell the alluring aroma of food cooking.  Who decided to put the hot food stands at the entrance to the festival?  Obviously someone who wanted to draw in the crowds!  Unfortunately I’d had a massive fry up for brunch in an attempt to put an end to my hangover so I didn’t need any more to eat.  But I have to say, wandering around a food festival hungover is probably the best way to save your pennies!

The gardens were really busy and there were long queues for all the food stands.  Once past the hot food, I came across the long marquees lined with stalls manned by local food and drink producers, as well as crafters.  I really could have spent a fortune on all the yummy goodies on offer but I managed to restrain myself and picked up a little piece of cheese that was “£1 per nibble” and some ice cream.  The cheese was was very strong.  It had a cheddar like consistency but the rind was mouldy.  I didn’t eat that bit!

I’ve been wanting to try Simply Ice Cream for a while now, ever since I read about their delicious flavours, so I was excited to spot their trailer.

I spent nearly 5 minutes agonising over which flavour to choose, finally settling for maple and pecan.  The guy spent a while rummaging in his freezer and finally found what he was looking for.  It was only after I’d walked away that I realised he’d given me chocolate and hazelnut instead!  But it didn’t matter as I’d happily have eaten any of the flavours on offer. The ice cream was very chocolatey with crushed hazelnuts in; it tasted like praline. It thawed really slowly so I was able to savour it for quite a while.

With all these distractions it would have been easy to forget Granma’s present! Luckily I didn’t and I picked up a couple of jars of jam for her. The first was raspberry curd (I tried a sample and it was scrummy and buttery!) and the second gooseberry and elderflower. Once home, I placed them in a cellophane gift bag and secured it with a ribbon so it looked like a neat gift. She was pleased so that’s the most important thing!

This year, the Canterbury Food and Drink Festival was organised by the people behind Lounge of the Farm, and they wanted to achieve more of a “festival” vibe.  By the hot food stands there was a busking corner surrounded by hay bales, and by the beer tent, in the bandstand, local bands performed, one of which was local bluegrass four-piece Gentlemen of Few, who I’ve heard on Radio 2, I think they’ve been nominated for the BBC Young Folk Awards.  They are bloody brilliant!  This is them on YouTube:

I’ll definitely be going again next year, but this time I’ll take my husband along and make a day of it. 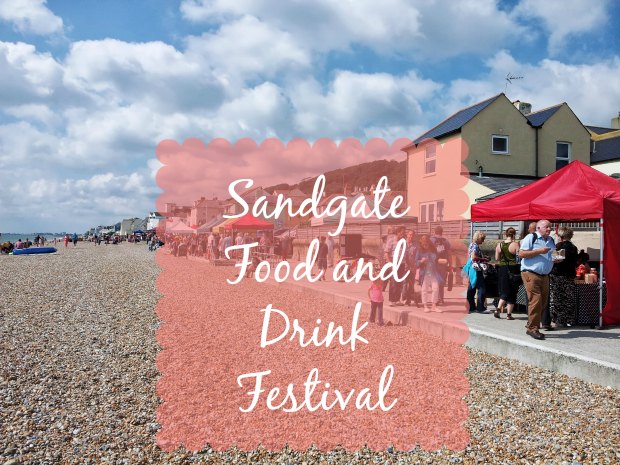 An extremely wet Saturday was an inauspicious start to the Bank Holiday weekend but the foodie gods played their part and the clouds dispersed to allow the sun to shine down on the Sandgate Sea and Food Festival.  This annual festival started in 2004 and takes place on the seafront behind the historic Sandgate High Street.  There were a variety of stalls including a contingent from France who were serving a hoppy lager from the Boulogne-sur-Mer region of northern France.

There were a choice of food stalls from which to choose our lunch. All were tempting, including a very large piece of Spanish tortilla from Fresh and Easy (a patisserie and cafe and Folkestone) and a tapas stall. We plumped for burritos from Escondido, a Mexican restaurant in Sandgate itself. I went for a chicken burrito and Marc went for a pork and green chili burrito. They were served from a chafing dish that actually meant the tortillas were a bit hard, almost crunchy. This isn’t how burritos are normally served but actually it made for excellent street food. The burrito was easy to pick up and eat without the filling falling out, which is was normally happens. The filling was very tasty but not at all spicy. That’s good for me though because I can’t eat spicy food. The burrito contained chicken in a tomato based sauce, rice and re-fried beans. I added guacamole, salsa and sour cream. The first two tasted homemade and were delicious. Guacamole is one of my favourite dips and I always prefer homemade to shop bought. We tucked into our burritos while sitting on the beach. Unfortunately we didn’t have long to look round the festival because I had to get home to cook Sunday lunch for my in-laws (braised beef with shallots and mushrooms, followed by tropical pineapple pudding). I saw on Twitter that a lady was planning to make peanut butter cupcakes and I was very excited! We managed to find the cupcake stall before going home but I was disappointed to learn she didn’t have peanut butter flavour. My mood soon lifted when I picked out a divine gingerbread latte cupcake. The cake was flavoured with both coffee and ginger, with a vanilla frosting. The sprinkles are tiny gingerbread men! So cute!

It was a pretty good weekend all in all. Yummy treats on Sunday followed by a healthy dinner, and a naughty BBQ on Monday with friends. Only one month until the Canterbury Food and Drink Festival on 27th to 29th September. I’m really looking forward to that as it’s a proper big festival held in the Dane John Gardens. I’ve not been since I was at college about ten years ago! I remember buying a lovely rhubarb and ginger pie.